These homemade brown butter cinnamon rolls are rich, soft and gooey, the best and easy sweet rolls you will make at home this holiday season. The nutty and toasted flavor from brown butter enhances the taste of these baked rolls. 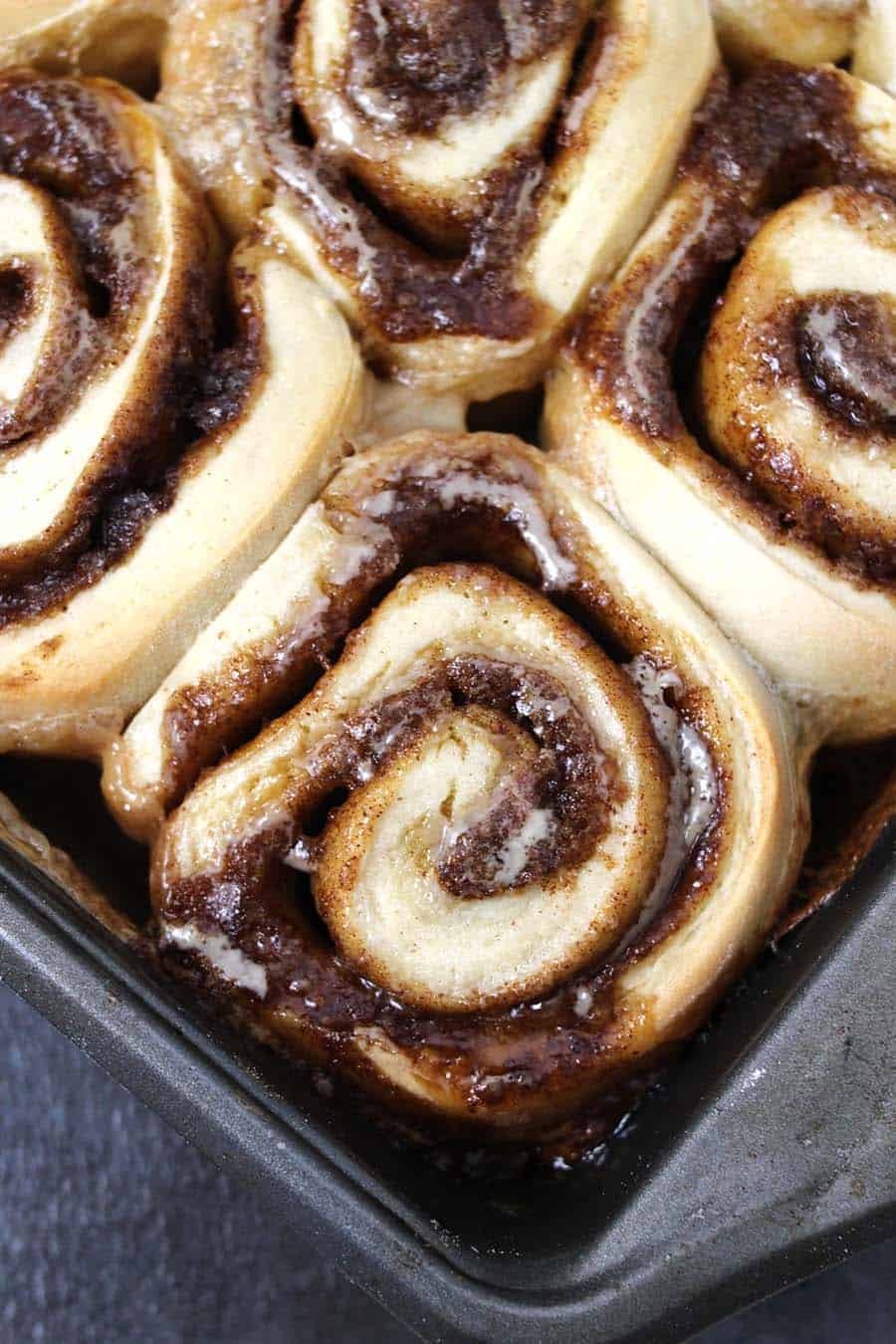 Cinnamon rolls or buns are one of the best sweet treat or dessert to start morning on a happy festive note during this holiday season or any weekend morning.

Cinnamon rolls are also know as cinnamon bun, cinnamon swirl, cinnamon Danish and cinnamon snail. These rolls are sweet and served for breakfast or as a dessert commonly in Northern Europe (mainly in Scandinavia) and North America. In Sweden it is called kanelbulle, In Denmark it is known as kanelsnegl, In Norway it is known as Kanelbolle, Skillingsboller and Kanelsnurr, and In Finland it is known as korvapuusti. (Source for these names : Wikipedia) 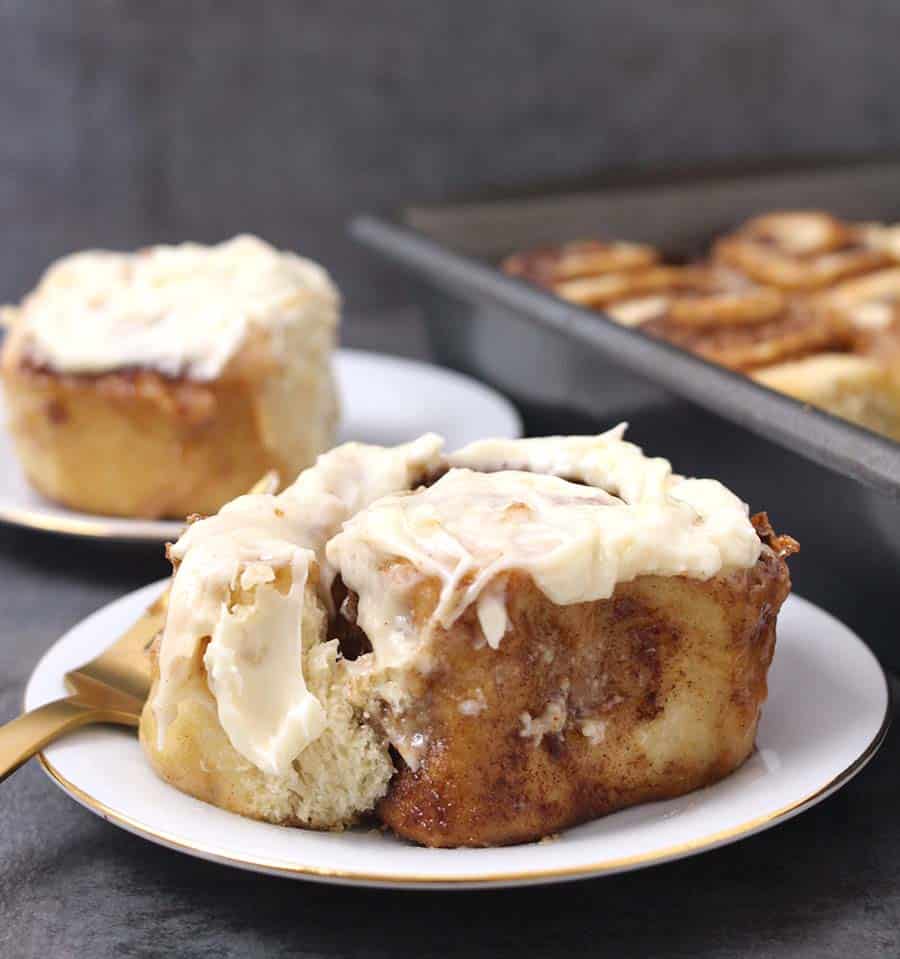 What are Cinnamon rolls?

Cinnamon rolls are traditionally yeast leavened dough over which cinnamon sugar mixture is sprinkled along with butter. This dough is then rolled and cut into individual portions and fried or baked. Main ingredients used in cinnamon rolls are flour, butter, sugar and cinnamon powder.

I was first introduced to Cinnamon rolls at Cinnabon in United States. I totally fell in love with it. People who have already tasted it definitely know what I am talking about. My love for baking, made me give these rolls a try at home. I have tried these rolls both with regular butter and brown butter. Both taste fantastic but my love towards brown butter from childhood makes me bake the rolls using brown butter frequently. 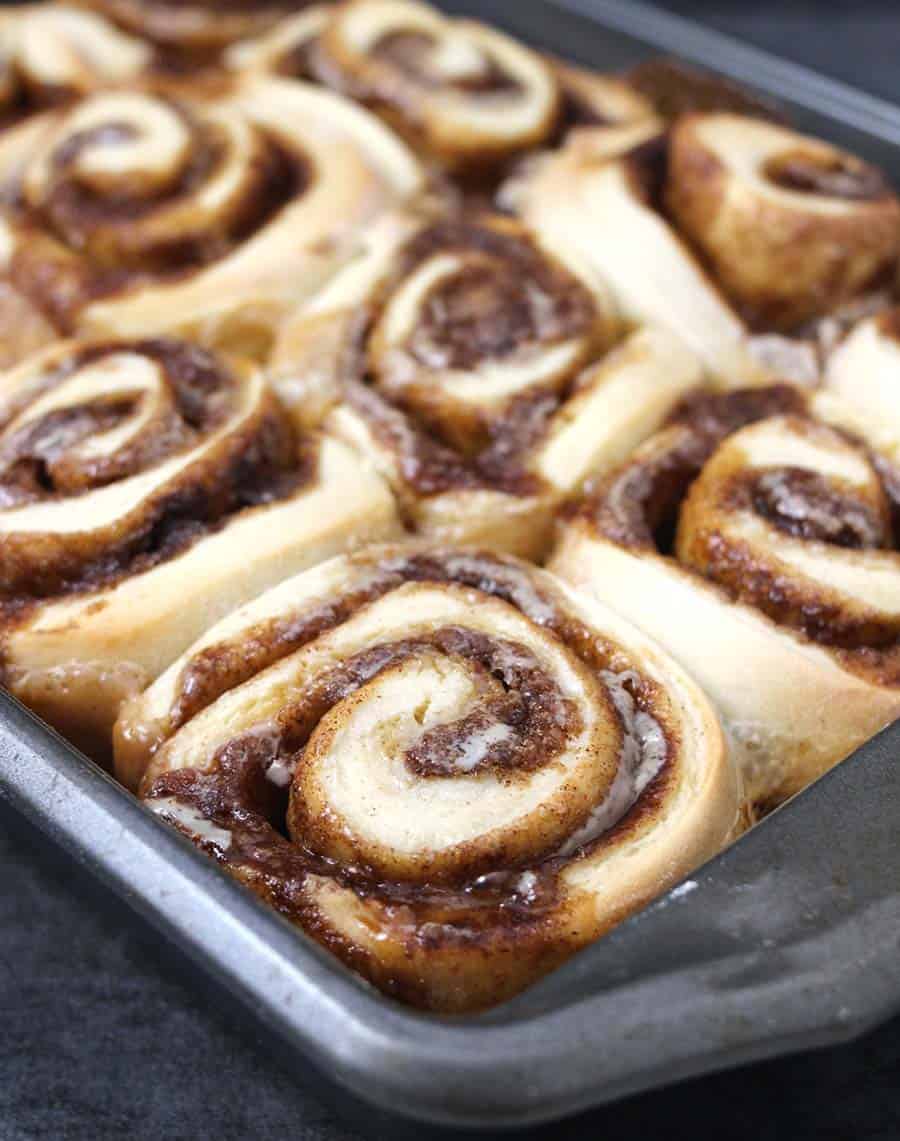 If you love brown butter and are planning to make this recipe, I would recommend making brown butter in advance.

HOW TO MAKE BROWN BUTTER? 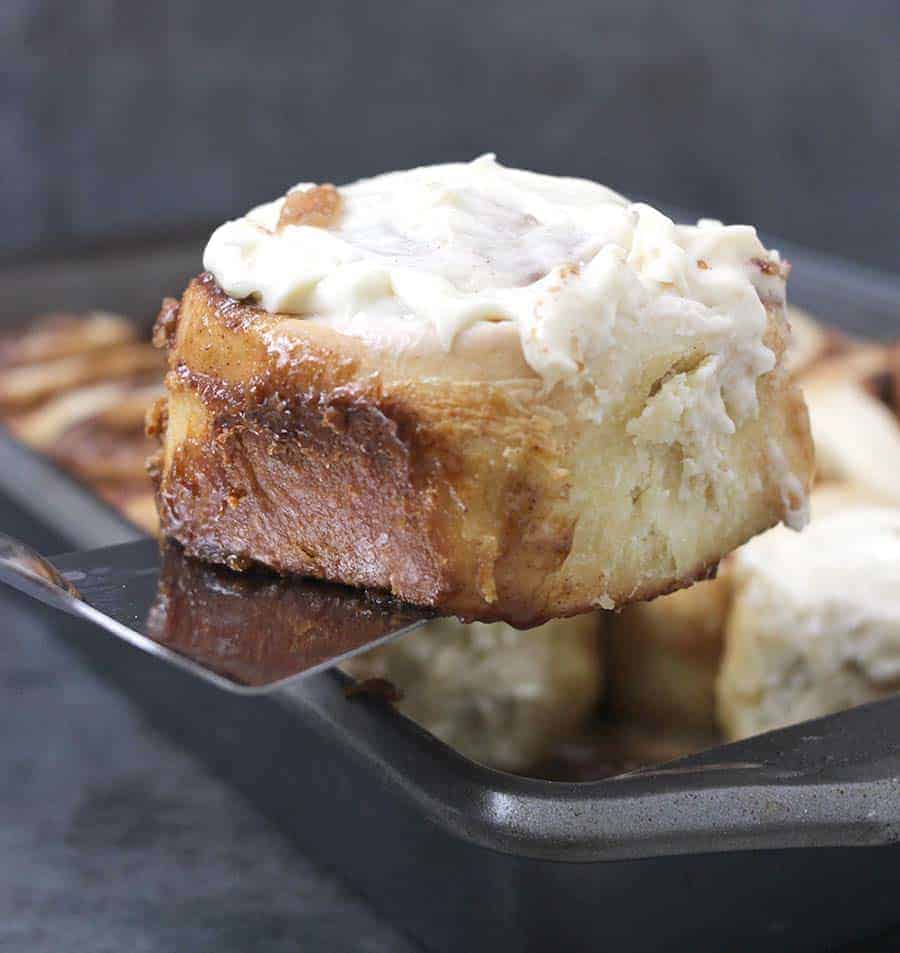 In a bowl, add yeast and luke warm milk and allow the yeast to activate. Next add eggs, brown butter, salt, sugar, and mix. Finally, add the flour and knead to get soft and smooth dough.

Add flour in increments. Do not add too much flour. The dough can be sticky or tacky but not too dry. This is the key to get soft cinnamon rolls. 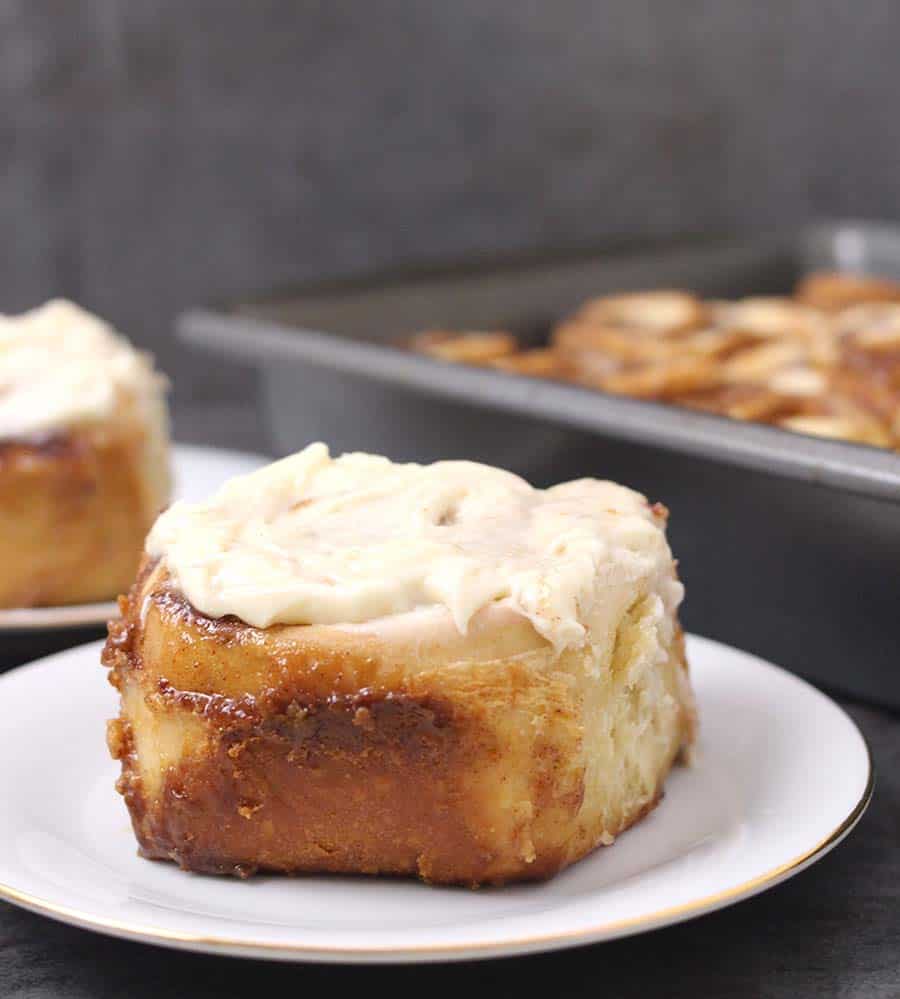 If you are out of time or want to keep the recipe simple, simply use regular salted butter.

How to roll cinnamon rolls or buns?

Once the dough has doubled in size, transfer the dough to a well floured surface to avoid it from sticking.

Using a rolling pin, roll the dough into a rectangle. Now spread the cinnamon roll filling. Fold it into a log starting with long side. Cut the log into 12 or 15 or as many rolls as you want depending on desired size and the size of baking pan you are going to use.

Leave it for second rise just until doubled in size. 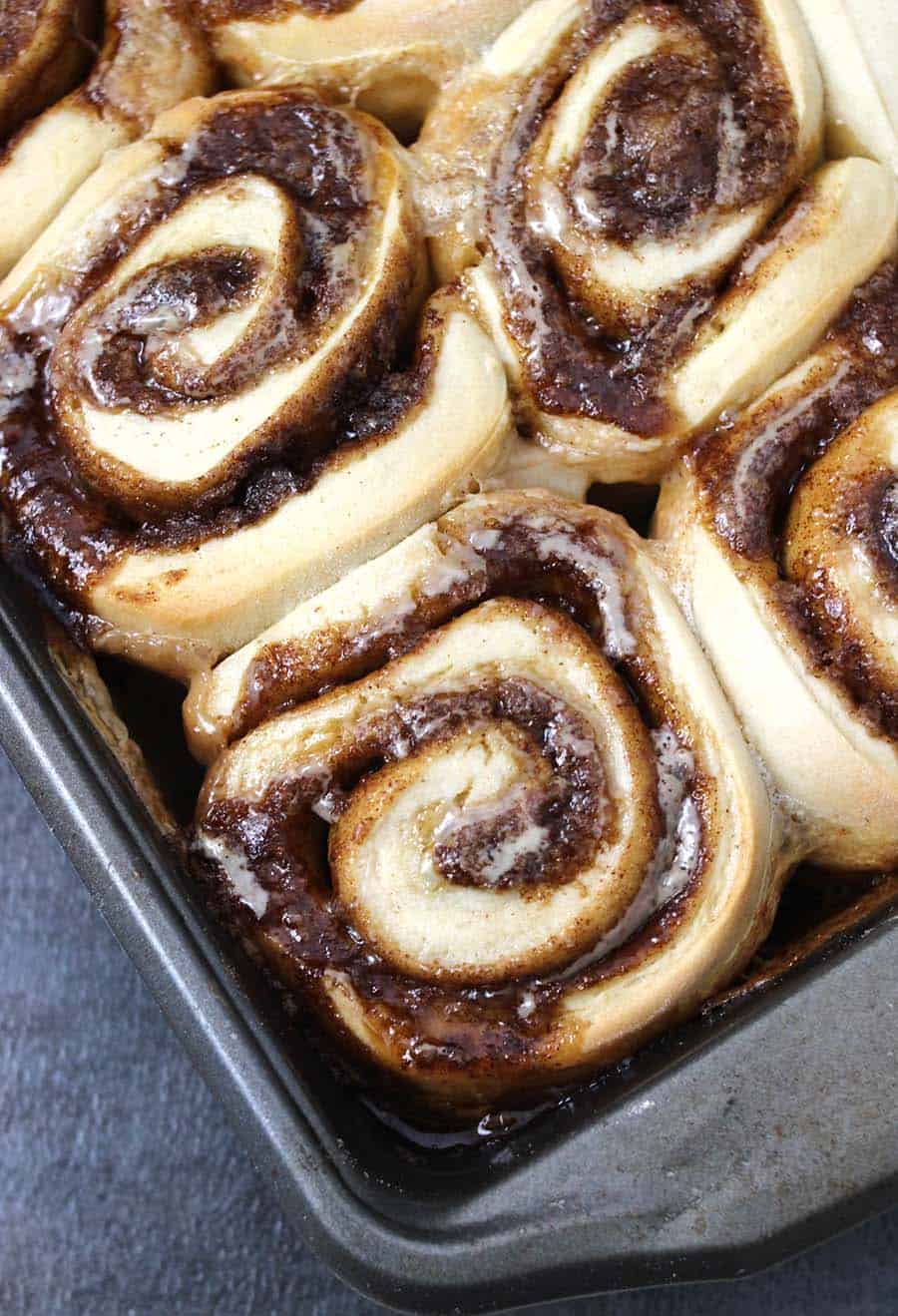 How to make cinnamon rolls or buns or cinnabons rich and gooey.

After the second rise you will have to pour the heavy cream on risen rolls so that the cinnamon rolls are soaked in heavy cream.  This will give you rich and gooey rolls or buns like the one you buy from Cinnabon.

How do you pour the heavy cream on the rolls?

First, slightly warm the heavy cream to remove the chill off.

Why should I warm the heavy cream before pouring?

Your dough generally rises in warmth and you want to continue the rise even during the baking process. So just warm the cream enough so that you can touch.  Not hot or cold. Even room temperature heavy cream is fine.

How to make icing or cream cheese frosting for cinnamon rolls or buns ?

Cream cheese frosting is my favorite when it comes to cinnamon rolls. The ingredients are pretty simple - cream cheese, butter, sugar and vanilla extract.

You can even add brown butter and a teaspoon of cinnamon powder to enhance the taste. This is a fail-proof recipe and I have prepared this several times. 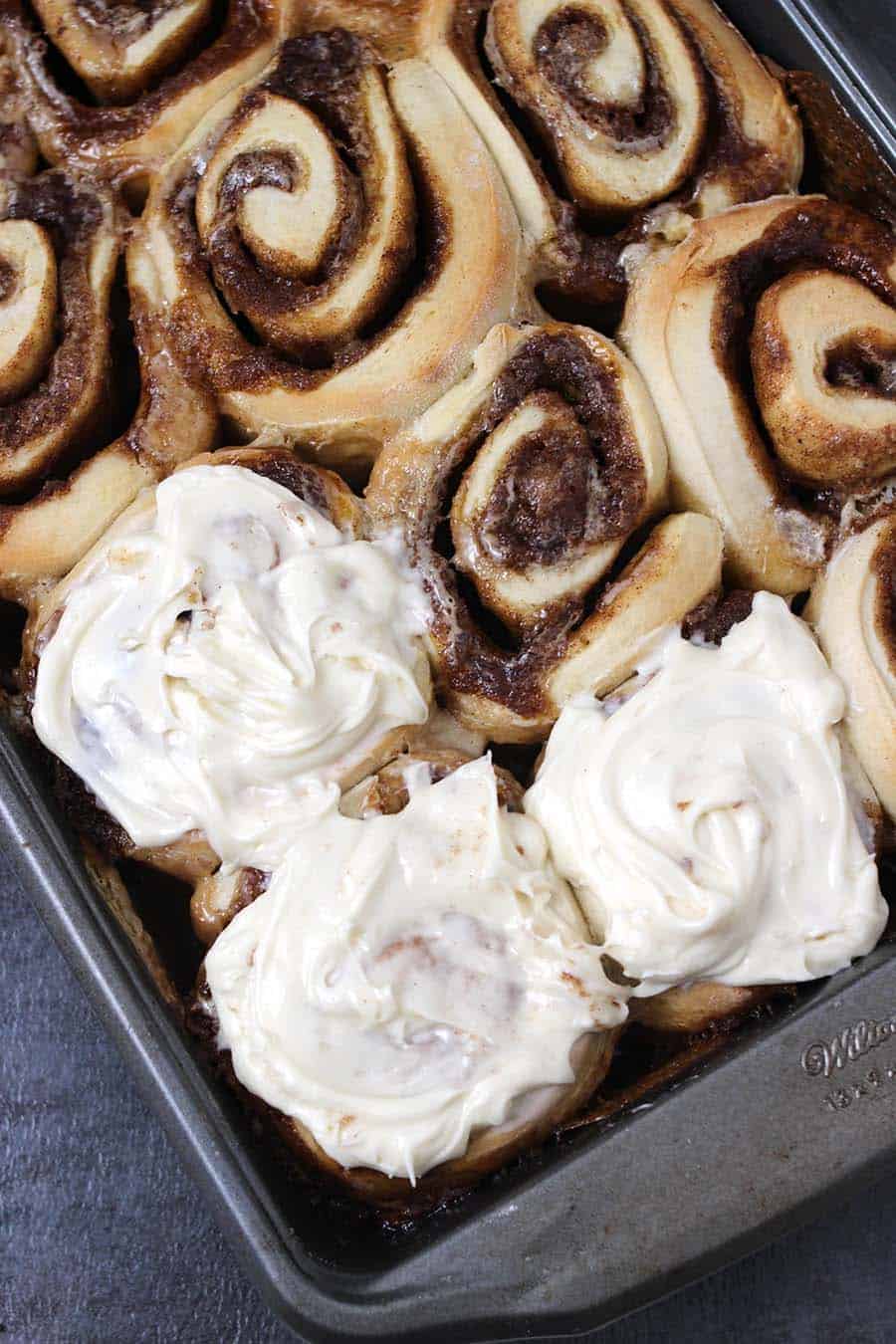 When should I add icing or frosting to Cinnamon rolls?

I generally add it when the rolls are still warm so that it gets soaked in and makes it better.

But if you want to make it look prettier for holidays or any special occasions simply add the frosting to the cinnamon rolls when it comes to room temperature.

Why are my cinnamon rolls or buns dry?

Too much flour in the dough will make your rolls dry and tough. Adding little flour will make it soggy and dense. Best practice is to add flour at the end in increments of tablespoon and check the texture of the dough.

When the cinnamon rolls are ready for a second rise in the baking pan, cover and refrigerate it overnight. Next morning when you are ready to bake pull them out of refrigerator.

At this point, they should have doubled in size in refrigerator. In this case just keep it out of refrigerator for 30 minutes to get chill off and bake.

Then pour the heavy cream on the rolls and bake. 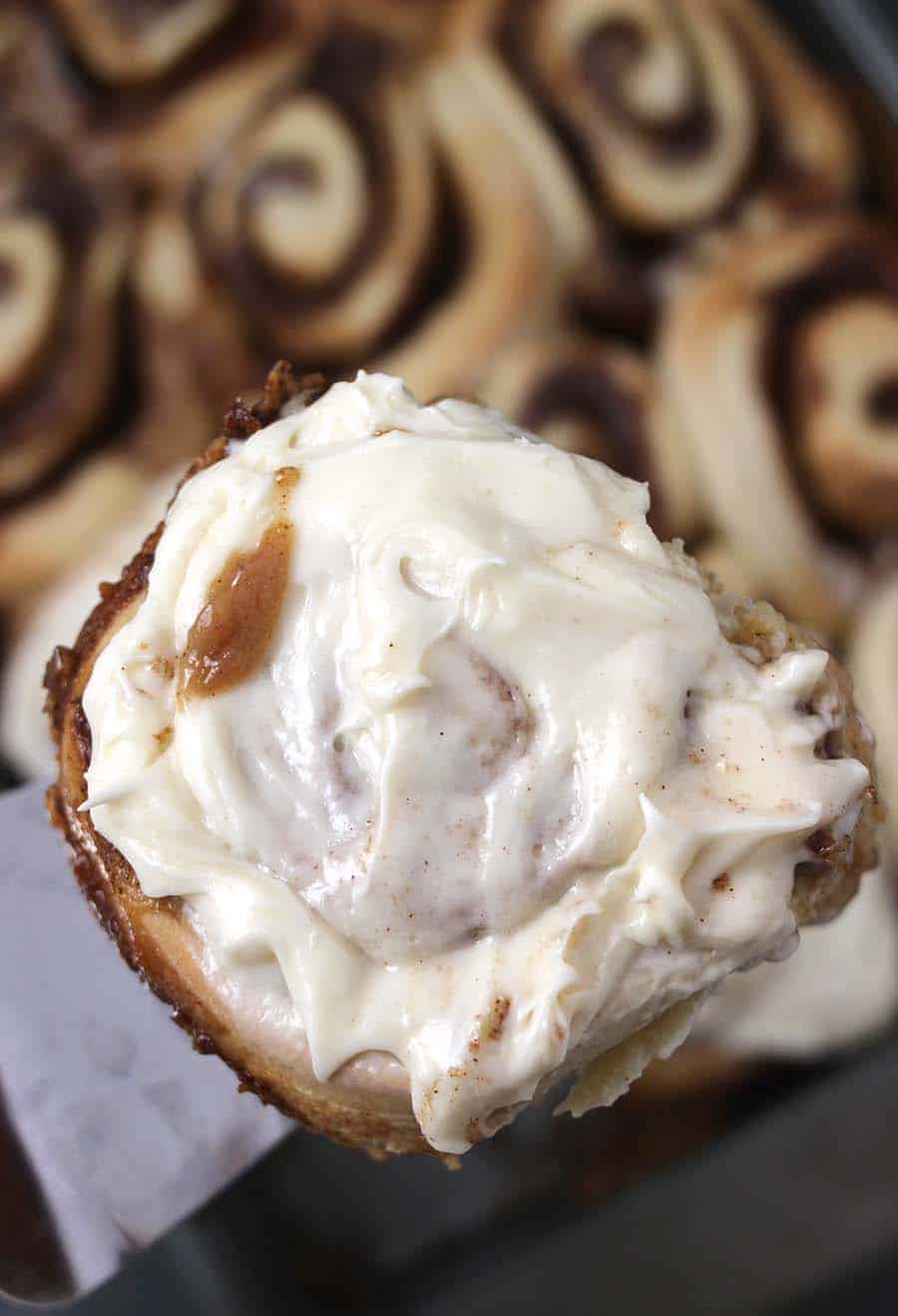 You can freeze the cinnamon rolls dough before baking. Once the dough comes to point of second rise, roll the dough, spread the filling, and cut them into rolls and place in baking pan. Then, keep it in freezer for one hour. Then place in freezer-proof ziploc bag.

When you are ready to bake the rolls, remove the the freezer and defrost.

To defrost, place the rolls in refrigerator overnight. Next morning, when you want to bake it, arrange it in baking pan and allow it around one hour at room temperature for second rise. Then follow the same steps and bake them.

How to store cinnamon rolls?

Baked cinnamon rolls remain fresh for few days, say up to 3 days at room temperature in an air-tight container. This will even keep them moist and prevent from drying out. If you keeping them in pan, make sure you cover it tightly with an aluminum foil.

The best way to store them is to keep the cinnamon rolls dough before the second rise in refrigerator if you need it the next day. Freeze the rolls if you are planning to store it for a long time. Thaw, allow to rise at room temperature and bake as needed.

What goes well with cinnamon rolls?

Cinnamon rolls are served with cup of coffee for breakfast or as a mid day snack or after meal dessert. But surprisingly I have also seen it paired with chili and its one of the best interesting combo. 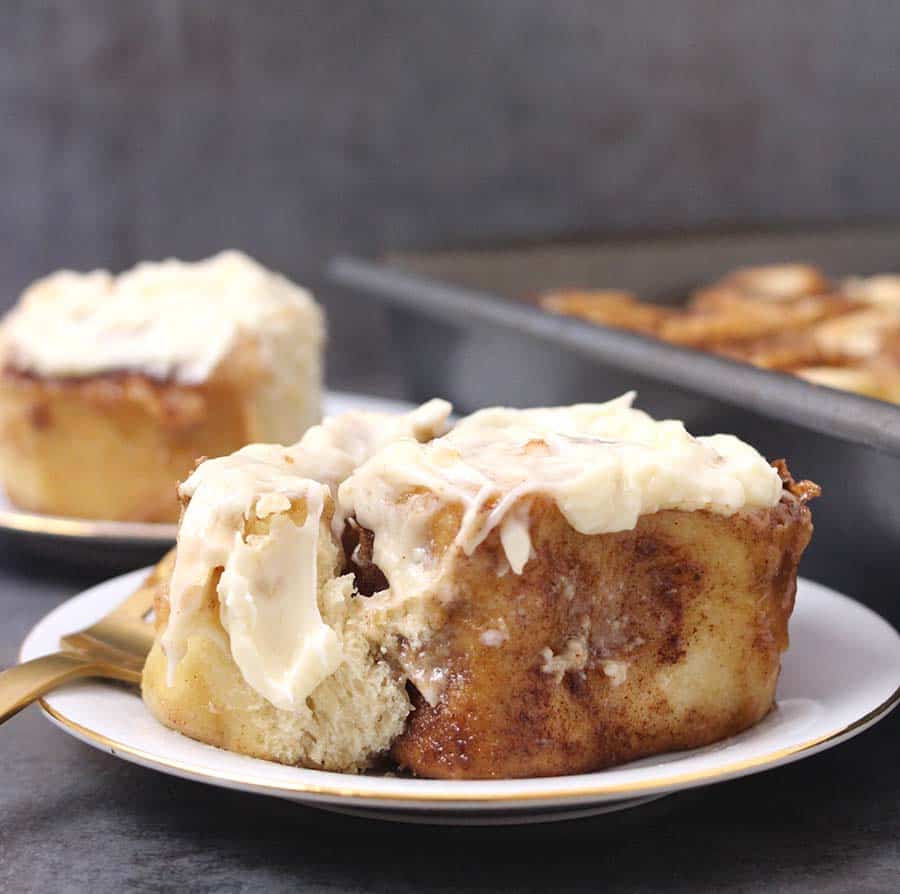 Can you make cinnamon rolls without yeast?

Yes, cinnamon rolls can be done even without yeast. You can substitute it with equal amount of baking powder. The amount of dough rise will be less compared to traditional rolls. Plus the rolls or buns will have slightly denser texture and will be chewier.

Can cinnamon rolls be made eggless?

Yes. If you want a vegetarian version of cinnamon rolls - then skip eggs mentioned in the recipe. The texture of baked cinnamon rolls will vary slightly.

Egg is mainly added to make yeast breads richer and finer, bind the ingredients and also provide the volume.

Cinnamon rolls can be made vegan with proper substitutes. The taste and texture will vary ofcourse vary slightly. Substitute milk with any dairy free milk, butter with vegan butter or coconut oil and cream cheese with vegan cream cheese.

After the cinnamon rolls are done with the second rise, preheat the air fryer to 350 degree F. Transfer around 4 to 5 rolls depending on the size and air fry for 5 minutes. Turn the rolls over and fry again for another 4 minutes. Repeat the steps for remaining cinnamon rolls. 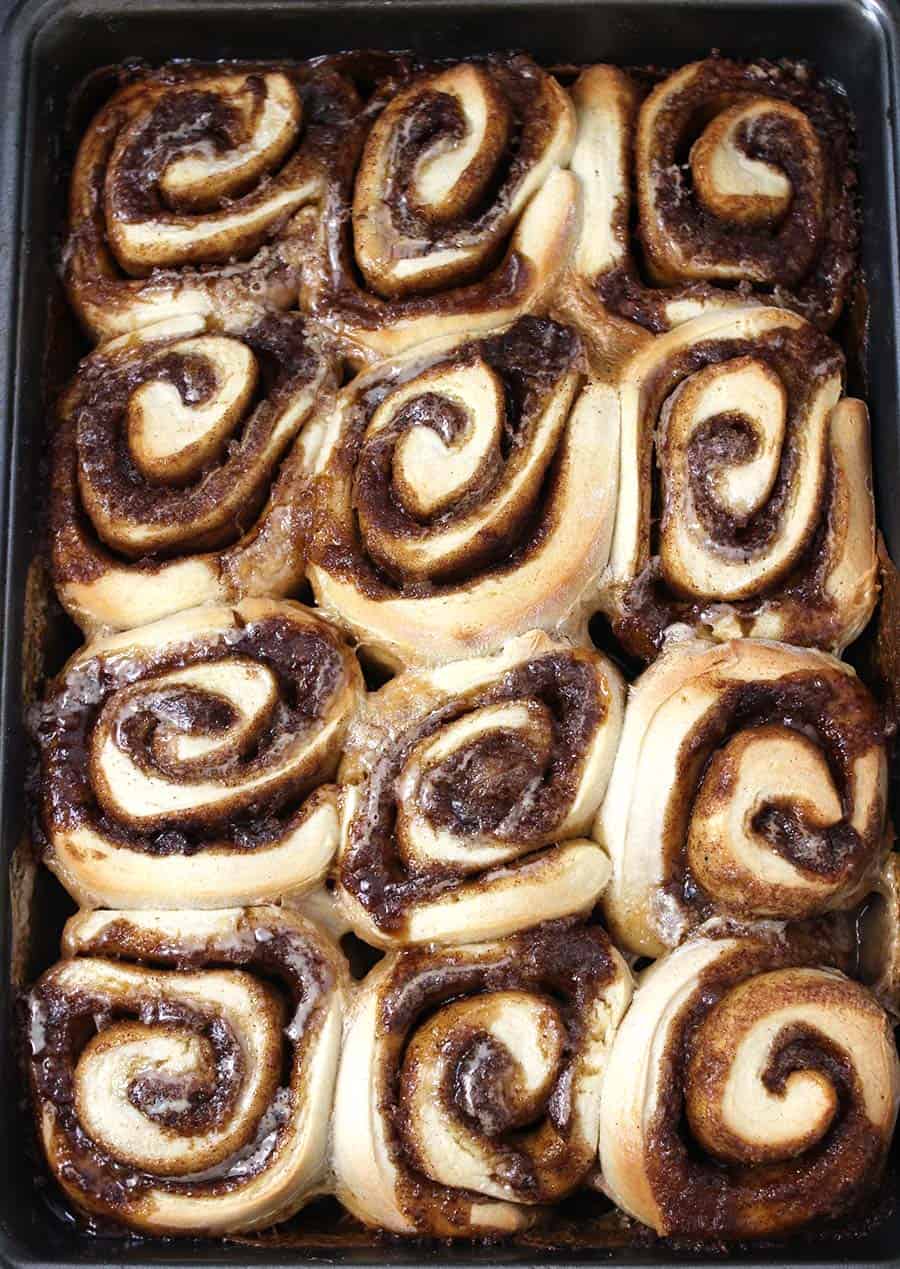 YOU ARE LOOKING FOR LAST MINUTE HOLIDAY SEASON DINNER MENU RECIPE IDEAS, CHECK THIS OUT 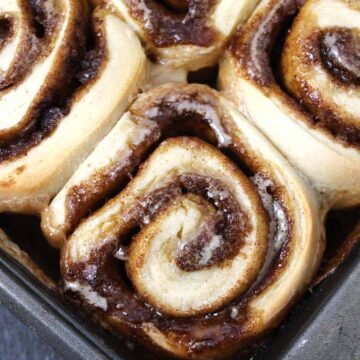 For pouring on unbaked rolls

If you like this best & easy cinnamon rolls recipe,

Don't miss to check out some of my delicious Easter, Thanksgiving and Christmas desserts, Fall and Winter desserts, or best, easy desserts for entertaining your family or a large crowd this Holiday season.