Chicken Tikka Masala is an addictive, classic dish for lunch or dinner where the chicken marinated in aromatic spices is first grilled and then mixed in a finger-licking sauce (masala). Vegetarians can prepare tikka masala with the same recipe but substitute meat with paneer, baby corn, mushroom, tofu, potatoes, or a combination of all.

It's very easy to make chicken tikka masala at home than you think. Homemade tikka masala or sauce tastes better than any restaurant or dhaba.

What is chicken tikka masala?

Chicken tikka masala is one of the popular chicken dishes around the world. Marinated chicken pieces in Indian spice mix are grilled to perfection in tandoor, oven, or barbecue and then tossed in a spicy gravy or curry called masala. Tikka masala is a smooth and silky blend of onion, tomato, and Indian spices.

What is the difference between butter chicken (makhani) and chicken tikka masala?

Both are popular dishes around the world. Butter masala or makhani originates from Delhi, North India, and tikka masala is a British invention.

Kundal Lal Gujral, who ran a restaurant in Delhi called Moti mahal, did not want any leftover cooked meat in his restaurant to dry out. To avoid this, he cooked them in aromatic tomato-based gravy along with butter and cream, adding richness to the overall dish, and named it Butter chicken or Murgh Makhani.

This is a delicious entree that can be prepared for your upcoming tailgating events, game nights (football or super bowl), potluck, Easter, Thanksgiving, and Christmas holiday dinner parties!

Chicken tikka is a dry item served as a side, starter, or appetizer. Marinated chicken in Indian spices is grilled to perfection on a BBQ/grill, tandoor, stovetop, or oven.

Chicken tikka masala is nothing but chicken tikka cooked in tomato-onion gravy along with additional spices, thus making it hotter and spicier. You can serve Chicken Tikka Masala as an entrée or main dish with Indian breads like naan or roti.

All ingredients required for tikka and tikka masala are very basic and available at any Indian store. But these days, you can even find these spices at all big stores like Walmart, Target, and Kroger.

How to make the best chicken tikka masala at home?

In short, one just has to follow 4 easy steps

Once you have Chicken tikka or paneer tikka or any meat or vegetarian tikkas ready, preparing the masala (gravy or curry or sauce) is super easy. This recipe below gives you a spicy curry, which is what my family and friends love. But based on the heat level you can tolerate, adjust the amount of red chili powder you add to the dish. You can even skip adding red chili powder to the tikka masala to obtain a milder gravy.

In the USA, you get really good quality tomato sauce, and thus I have substituted tomatoes with this tomato sauce. Add two pureed tomatoes to the recipe if you do not have store-bought tomato sauce. Please note that the tomato sauce available in countries like the USA differs from what we get in India.

To start with chicken tikka masala, heat the oil in a pan, and add cumin seeds. When they splutter, add onions, garlic, and ginger, and sauté until they become translucent.

Then add sour cream, tomato sauce, and all the spice powders like chili powder, garam masala powder (tandoori masala), and coriander powder as per your taste. Because I had some extra marinade from preparing chicken tikkas, I have added it to the gravy - this is entirely optional.

Once this comes to a simmer, add the prepared chicken tikkas along with the grilled veggies if desired and continue to simmer for additional 5 minutes. Finally, add butter to this and serve with your favorite bread!

What to serve with chicken tikka masala?

Tikka Masala is a classic accompaniment for breads like naan, roti, chapatis, and ghee rice or brown butter rice. Today, I have served chicken tikka masala with Garlic butter naan, and this is one of the best combinations ever.

Which works best for tikka - chicken thighs or chicken breasts?

Both chicken thigh and breast meat work equally well - but I generally prefer using thighs over breasts as I love the fact that the meat is tender and juicy when cooked. An additional plus point is that the marination time for thighs is less compared to breasts. If you want to prepare this dish as quickly as possible, then use chicken thighs.

If you use chicken breasts for health reasons, marinate them a little longer. Marinating the chicken breasts overnight would give you the best results. Also, let the grilled breast meat rest for a few minutes before serving or slicing through to retain its juiciness.

Chicken Tikka Masala can be made two days ahead of time. Cover and refrigerate it in an airtight container. Dishes like this which use a lot of spices, taste better over time as the added spices have the chance to infuse their aroma into the dish.

Can you freeze chicken tikka masala?

You can freeze this dish for up to 2 months and reheat and use it as desired. Make sure you store them in a zip lock bag and lay them flat.

Indian Tikka Masala is on the spicier side and comparatively less creamy. Also, the creaminess is achieved through a combination of cashew paste and heavy cream.

British Tikka Masala is relatively less spicy and has a hint of sweetness. The gravy is much creamier due to the addition of a generous portion of heavy cream.

What if I do not have pre-cooked chicken tikkas?

Marinate the chicken as instructed in my tikka recipe, and you can then prepare fresh tikkas on your grill or oven. If you do not have access to either a grill or oven, you can also cook the chicken on the stovetop or in an air-fryer - just ensure the marinade you prepare is thick and not runny!

Can I blend the tikka masala gravy?

To blend or not is a personal choice. I generally do not blend the gravy for chicken tikka masala. If you prefer a smooth and silky gravy, feel free to blend the sauteed onions, spices, and tomatoes before adding the tikkas, and then follow the instructions in the recipe below to finish the dish.

The homemade version of tikka masala has low carbs and no sugar and is one of the best chicken dishes for a ketogenic diet.

Vegetarians can still prepare this tikka masala sauce by substituting meat with paneer or tofu, cauliflower, baby corn, or mushroom.

In the same pot (do not have to clean after roasting the chicken), add oil, cumin seeds, chopped onions, ginger, and garlic, and saute until light golden in color. Add tomato puree, chicken pieces, and pressure cook for 4 to 5 minutes. Let the pressure release naturally for another 5 minutes, before manually releasing the pressure. Open the lid, and turn the IP back to Saute mode, add sour cream and other spice powders, stir well and simmer for 5 minutes. The Instant Pot Chicken Tikka Masala is ready. Serve with rice or breads of your choice. 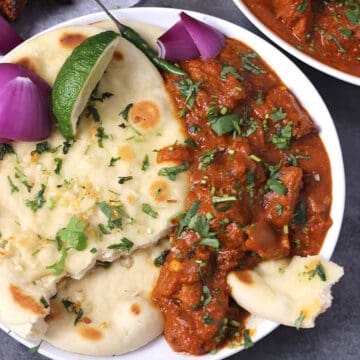